A discussion with Professor Joe Kable and the Wharton Neuroscience Initiative (WiN). Interview and write-up by Katie Fazio (W’20 C’20).

(WiN): What brought you to where you are now?

Kable: I got my PhD in neuroscience here at Penn in the neuroscience graduate group, and after that I went and did a post-doc at NYU with Paul Glimcher, who had just started a center for neuroeconomics up at NYU. In my PhD, I was generally interested in understanding brain function in humans with functional imaging techniques, and at NYU I focused in and applied them to understanding the basis of decision making by beginning to bring in thoughts and ideas from economics and decision science as well. Then I was lucky enough to be offered a job in the psychology department here, so I came back, and started my own independent lab. And have been here since then.

(WiN): What do you see as the connection between the research that is being done and business?

Kable: There are some obvious connections, and even some sort of not obvious connections. Obvious connections involve the fact that many consumers have to make these kinds of tradeoffs in financial decision making. One of the things that we’ve established is that people make these tradeoffs in different ways. They vary dramatically in how patient or impatient they are with respect to the future in terms of their future time perspective. And a lot of that is reflected in and is paralleled in their brains. This has implications for understanding why different consumers make the decisions that they do.

Understanding the neural basis also has applications in understanding what happens as consumers age. So one thing that financial companies want to understand is, “how does the aging process potentially affect how people make these tradeoffs?” especially because older individuals arguably face more consequential tradeoffs of this nature.

(WiN): What is your favorite field specific vocabulary word or phrase?

Kable: One that I’ve been thinking about a lot lately is “network,” because brain imagers use that in a very specific way. Obviously business people probably have a different use of the term “network.” One thing that I’ve been thinking about is how deeply the analogy between human networks, as studied with network science, and brain networks, as studied with network science, will hold. We might know the ways that we can identify networks in the human brain, those areas might elicit correlated brain activity, but that’s not quite as specific as knowing that one brain area is definitely in communication with another brain area.

You can put this back into terms that are immediately apparent in social networks. What we observe in the brain is that you and somebody else tend to post on twitter at the same time. That could be because you are actually connected, and you follow each other. For example, when somebody posts something and then you repost it. Or if you follow them and they follow you back. Or it could be that you have shared connections and so you see the same things and you’re at the same events and so you are posting at the same time. There’s not a direct connection there that’s driving that.

(WiN): For those who don’t have a background in neuroscience, could you explain how you go from an image of the brain to a statement on the nature of human decision making.

Kable: So functional brain imaging involves the same kinds of MR scanners that you would use for clinical imaging. And what has been a major advance for human neuroscience is a delightful accident of nature which is that blood that has a high proportion of oxygen and blood that has a low proportion are discriminable in certain kinds of MRI. So you can tell the difference between the oxygen content of blood in an area. And it just so happens that oxygen content is a signal of having more blood flow to an area, and having more blood flow is a signal of there being greater activity there. So we can use the MR signal as an indirect index of where there is more or less activity in the brain. So we pose decisions to people while we measure the signal in the scanner and we look for correspondence between brain signals and aspects of the choice you made.

(WiN): How would you assess the strengths and weaknesses of using brain imaging as opposed to survey response technique?

Kable: This has been a long standing debate in psychology. I think that behavioral measures and brain measures answer different questions. Often times at the end of day, what matters practically is what people do. What we all want to understand is why people choose what they do. So the end result is that behavioral result, and I think neuroscience brings clues and evidence about the motivation side of that. I think it will ultimately will allow us to make better predictions about who’s going to do what under what circumstances. What that means is that you’re never going to stop measuring behavior. But if you look under the hood, and look at the mechanism, you will be better able to predict people’s behaviors. 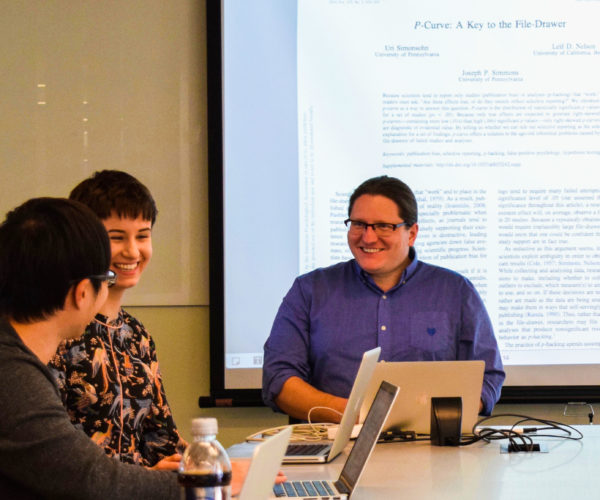